The Fitzgerald Biosphere Reserve (330,000 ha) is located between Bremer Bay and Hopetoun on the south coast of Western Australia. It comprises upland plains, a marine plain deeply incised by several rivers creating large valleys and tablelands, and a chain of small isolated peaks running close to the coast, forming the distinctive Barren Ranges. The highest peak reaches 450 metres above sea level, and rugged coastal cliffs are formed where the quartzite ranges meet the ocean.

Sand dunes, inlets and rivers, swamps and lakes also occur on the gently sloping marine plain, and dry up in summer. There is a rich diversity of plant species in the park and surrounding areas, including dry sclerophyllous woodland, coastal woodlands and heath. The reserve contains over 250 rare or geographically restricted plant and animal species, about many of which little is known.

Of the 2,000 vascular plants species native to this area, around 75% are endemic. Human impacts that occur within the reserve are mainly related to tourism and the development of visitor facilities. Some 36,000 people visit the reserve each year (2003). 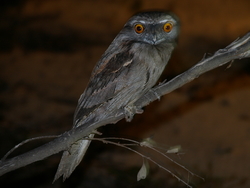 The Fitzgerald Biosphere Reserve lies on the southern edge of the Yilgarn Block and the adjoining Albany-Fraser Province. The bedrock of the northern edge of the biosphere reserve forms part of an ancient crustal segment known as the Yilgarn Craton. Granite and gneiss are the predominant rock types with minor enclaves of altered sedimentary and mafic igneous rock. Skeletal soils are associated with granite exposures and extensive areas of shallow loamy sand.

The region boasts huge diversity in plant species including the only remaining example of wet sclerophyll (with thick, leathery leaves) forest, dry sclerophyll forests, coastal woodlands and scrub, several major river systems, lakes and swamps, and remnants of biologically important woodlands and shrublands belonging to the wheatbelt. The region ranks among the most important areas for plant biodiversity in the world and contains over 800 rare and threatened plant and animal species, about many of which little is known. Of the 5,000 or so vascular plant species native to this area, 79% are endemic. 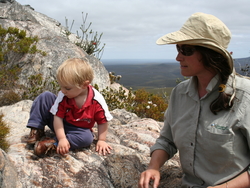 Only park rangers and their families live within the borders of the biosphere reserve. Tourism is the main economic activity: the area receives approximately 36,000 people each year, the vast majority of which are local people. The principal touristic activities are whale watching, hiking, camping, bird watching and scuba diving.