Located in the south of China in Guizhou Province, Fanjingshan is part of the Chinese Subtropical Forest biogeographic region. The topography of the reserve is characterized by mountainous terrain, whose main peaks form part of the Wuling Mountain Range. The altitude ranges from 480 metres to 2,570 metres above sea level. 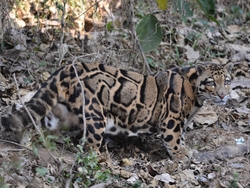 The climate in Fanjingshan is characterized by humidity and mid-subtropical monsoons. The biosphere reserve is known for its large protophyte forests, the only well-preserved primitive forest ecosystem at this latitude in the world. Many endangered species, such as Rhinopithecus breichi, rely absolutely on this complex forest ecosystem. Moreover, the largest area of Davidia involucrata (Dove tree) can be found in Fanjingshan, while Abies fanjingshannensis are endemic to the region. Sub-tropical and temperate rain forests, as well as mixed mountain and highland systems, are the main ecosystems in the reserve. Additionally, the area is home to populations of Rhinopithecus brelichi (endemic golden monkey). The biosphere reserve has focused on research activities since its establishment in 1986 and has made notable advances in research on the ecology, domestication, reproduction and habitats of the golden monkey. Other fauna species found in the reserve include Neofelis nebulosi (Clouded leopard).

Some 1,100 people live permanently in the core area of the Fanjingshan biosphere reserve and 15,000 residents have been recorded in the buffer zone (1999 figures). The reserve is situated in one of China’s poorest areas – economic activities in the buffer zone include mining, livestock raising and slash-and-burn agriculture. Apart from the Tujia, Miao and Dong, the Han people represent the largest ethnic group. The nearest major towns are Jiangkou county, Yinjiang county and Songtao county. The area is a sacred site for Buddhism dating back to the Ming Dynasty, and is also a popular tourist destination, attracting some 80,000 national tourists per year (1999 figures).