Dalai Lake Biosphere Reserve, in the far north-eastern part of China, covers grassland ecosystems and wetlands which are considered as internationally important for migratory birds under the Ramsar Wetland Convention. The biosphere reserve is an ideal site for research on wetland ecosystems and bird migration, with many rare species are distributed. This region is thought to be one of the places where traditional Mongolian culture originated. 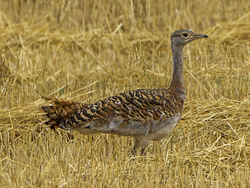 Dalai Lake Biosphere Reserve, in the far north-eastern part of China, covers grassland ecosystems and wetlands which are considered as internationally important for migratory birds under the Ramsar Wetland Convention. The typical steppe ecosystem is dominated by species such as Stipa grandis and Aneurolepidium chinense. However, this area is relatively fragile due to its thin soil layer and low precipitation (less than 350 mm per year). The main problems arise from overgrazing, overfishing and increasing eutrophication of the lakes.

42 species of national class one or class two protected birds in Reserve are distributed, of which about 18 species are included in the world seriously threatened species. Many rare species are present in the biosphere reserve, for example the Mongolian gazelle (Procapra gutturosa) and the bird (Otis tarda). In addition to abundant bird resources, the reserve is also rich in wild fish resources. There are currently 30 kinds of identified fish in the reserve. Dalai Lake Biosphere Reserve offers ideal sites for researches on wetland ecosystems and bird migration, cooperating with Mongolia and Russia.

The local communities within the reserve mainly include the Xingkaihu Farm, Xingkaihu Aquaculture Company and Baipaozi Township. There is a total population of 32,000, comprising Han, Hui, Korean and Manchu people with Han people accounting for 95% of the population. The Xingkaihu Farm covers an area of 139,000 hm2 and has a population of 12,000. It has under its jurisdiction 26 crop and livestock farming teams and 11 industrial, transportation and commercial enterprises. Its agricultural and industrial output value totals some 130 million yuan and annual rice production stands at 800,000 tons. The “Xingkaihu” brand rice has been labeled as one of China’s green products. The farm’s annual production of aquatic products reaches 200 tons. The farm’s paper mill exports six products to 21 countries and regions including Japan and Canada. In recent years, industries such as ecotourism, leisure tourism and agricultural tourism have been supported and promoted by the government and local communities. Infrastructure construction has been developed to ensure that the ecotourism will gradually embark on a healthy development path.