The Changbaishan Biosphere Reserve is located in the northeast of China on the border with the People’s Democratic Republic of Korea. The topography is composed of a basalt platform, basalt slope highlands and cone-like volcanoes. Craters produced in the distant past now form lakes, which are surrounded by sixteen mountains. The highest peak, Mount ChangBai, rises 2,691 metres above sea level; at its summit can be found Heavenly Lake, hot springs and a waterfall. Small volcanoes stretch from the northwest to the southeast, and delineate the border of the reserve. 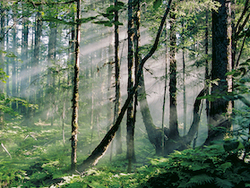 The temperate continental climate of the reserve is influenced by monsoons. The vegetation within the area also alters with the altitude, encompassing deciduous forests, mixed coniferous-broadleaf forests with Pinus koraiensis (Korean pine), coniferous forests, dwarf-birch forests and alpine tundra. The flora comprise European, Siberian and central Chinese species, and include 1,800 species of vascular plants. The biosphere reserve also provides a habitat for Panthera tigris longipilis (North East Asian tiger), the largest tiger subspecies in the world.

Temperate and sub-polar broad-leaf forests or woodlands and mixed mountain and highland systems are the major ecosystem types. Examples of flora and fauna species living within the reserve include Fraxinus mandshurica(Manchurian ash), Panthera tigris (tiger) and Mergus squamatus (scaly-sided merganser).

About 2,000 inhabitants live in the biosphere reserve (1997 figures). The nearest major towns are Erdo town, Antu County, Fusong County and ChangBai County. Tourism has become a key activity with 170,000 tourists visiting the reserve during the summer season. The authorities of Changbaishan work together with local communities to diversify the local economy, for instance, through the cultivation of economic and medicinal plants. Several human activities infringe on the biodiversity of the reserve, however, including tiger poaching and the collection of plants (e.g. Panax ginseng). The low income and poor education of the local population are thought to be the main threats to biodiversity. In order to increase public awareness, a Nature Museum and Information Centre have been established as dissemination points for environmental education.