Cat Ba Biosphere Reserve is an archipelago located in northern Viet Nam adjacent to the Ha Long Bay World Heritage site. It is internationally renowned for its limestone karst geomorphology and provides one of the best examples in the world of a fengcong and fenglin karst landscape invaded by the sea. The 366 limestone islands include landforms, caves and cave deposits that provide evidence of a long history of erosion and landscape evolution. 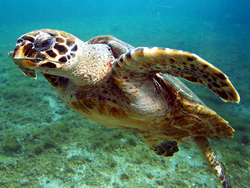 The Cat Ba Biosphere Reserve is considered part of the Indochinese rainforest biogeographical province. It includes tropical humid forests, wetlands, mangroves and coral reef ecosystem types. The northern coastal region of Viet Nam has a humid, tropical monsoon climate with distinct wet and dry seasons. The area suffers from a high frequency of typhoons with 28% of all typhoons impacting the Vietnamese coastline appearing in this area.

There are 2,026 species found in the biosphere reserve including 199 phytoplankton, 89 zooplankton, 75 forms of seaweed, 23 types of mangrove, 160 corals, 475 zoobenthonic organisms, 119 fish, three seagrasses, 142 species of terrestrial fauna and 741 plants.

Many species are endemic and rare, the most significant being the globally important Golden-headed langur (Trachypithecus poliocephalus), restricted in range to Cat Ba Island, the largest of the 366 islands, and found nowhere else in the world.

The Hawksbill turtle (Eretmochelys imbricata) found in the Cat Ba region is inscribed on the IUCN Red List, while the seahorse (Hippocampus spp.) is also rare and threatened. Mangroves and seagrasses on Cat Ba function as nurseries for life in the bay and as protective buffers for local inhabitants from storm surges and typhoons driven by climate change and sea level rise. 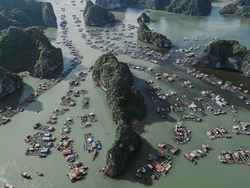 Cat Ba Island and its marine waters have a long history of human utilization for subsistence and cash crop agriculture, fishing, aquaculture and mariculture. Based on the evidence of archaeological remains, people have inhabited the Cat Ba area for at least 6,000 years ago. Two ethnic groups currently live in the area: the Kinh and Chinese-born Vietnamese. These ethnic groups are intermingled and not separated into different areas or communities.

The main economic activities are agriculture, fishing and hunting, with tourism also functioning as a key industry. The biosphere reserve has 42 archaeological sites containing prehistoric relics with traces from the Pleistocene era. Cultural artefacts and monuments on the island of Cat Ba include the remains of the temples Cac Ba and Cac Ong, while ancient citadels of the Mac dynasty are found on Xuan Dam. A number of festivals are celebrated including the dragon-shaped boat race, the Sea God ceremony and several fishery festivals all of which constitute popular tourist attractions.