The Can Gio Mangrove Biosphere Reserve is located in the coastal district southeast of Ho Chi Minh City. The reserve provides opportunities to advance environmental protection across a continuum of habitats, ranging from coastal areas to the boundaries of Ho Chi Minh City, the biggest industrial city in Viet Nam. The mangrove forest hosts the highest diversity of mangrove plant species, mangrove-dwelling invertebrates and mangrove-associated fish and shellfish species in the sub-region, and is regarded as the ‘green lungs’ of the city.

Management Board of Can Gio Mangrove Biosphere Reserve 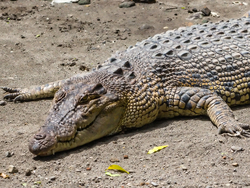 The Can Gio mangrove forest grew out of a comparatively recent brackish swamp with soil foundations created by the Saigon and Dong Nai Rivers. The development of the mangrove forest is dependent on high precipitation and a high density of rivers interweaving the area, which provide a rich and plentiful supply of alluvium in the estuarine regions. The soil formed in Can Gio has been created by a combination of clay alluvial depositions, vitriolic processes and a brackish water table. 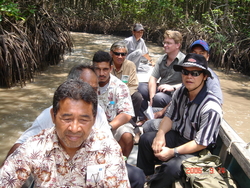 There are no communities living in the core area and buffer zone with the exception of forest protectors and their households, forestry staff and a few fishermen who operate traditional shrimp-trappers in some canals within the mangrove forest. A permanent population of almost 70,000 inhabitants lives in the transition zone of the biosphere reserve. These include groups of non-indigenous local people, the majority of whom are Vietnamese. Minorities located in the reserve include Chinese and Khmer communities living together in concentrated communes and towns in the transition zone.

The main economic activities are agriculture, aquaculture, fishing, salt-pan, trading and tourism. Revolutionary forces made active use of the region during the wars against France and the United States of America in the nineteenth and twentieth centuries.