The Bunaken Tangkoko Minahasa Biosphere Reserve in North Sulawesi is located in the heart of the Coral Triangle of the Indo-Pacific Region in Indonesia. The biosphere reserve spans a total 746,405.92 hectares of terrestrial and marine habitats. The area encompasses a mosaic of ecological systems including a coastal area with coral reefs and seagrass, mangrove and coastal forests, islands and terrestrial ecosystems. The biosphere reserve is home to over 130 species of mammals including the Dian’s tarsier. The region profits from the production of cocoa, coffee, fisheries, and ecotourism. 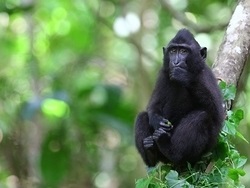 The Bunaken National Marine Park is a representative of Indonesia's tropical sea ecosystem located at the center of the marine and coastal biodiversity of the Indo-Pacific region. Mangroves in the Bunaken Island National Park mostly located along the coastal of Small Island and coastal of Bunaken Islands, where 34-46 species of mangroves can be found with Ceriops tagal, Rhizophora apiculata, Rhizophora mucronata, Bruguiera gymnorhyza, Avicennia marina, Xylocarpus moluccensis, Sonneratia alba, and Sonneratia caseolaris. Penyu hijau (Chelonia mydas) and penyu sisik (Eretmochelys imbricata) are often seen when we dive or just snorkel on reefs in the Bunaken National Park area.

Mount Tumpa is one of the mountains in North Sulawesi Province has a rich flora and fauna including soil insects. It is a primary forest that is still intact and slightly disturbed by human exploitation.

Mount Lokon Nature Reserve has the unique ecosystem of the Mount Lokon area in the form of an active volcano area. It features mountain forests with active volcanoes and has two very interesting caves.

Primates found in this area are Sulawesi black monkey/yaki (Macaca nigra) with a density about 2 individuals per square km and the species of tangkasi (Tarsius spectrum), squirrel/bajing (Prosciurillus leucomus) with density of 6.83 per square km. Other mammals are kuskus (Phalanger sp.) and babi hutan (Sus celebensis).

Based on research data, diversity of diurnal birds (active during the day) recorded as many as 28 species from 18 families. In the study, the number of endemic birds was 64% or 18 species, while 25% or 7 species found were endemic to North Sulawesi. 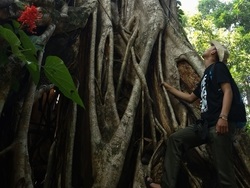 The buffer area has an important role for forest protection, forest production (NTFPs), and agriculture development. Agricultural
role is especially for food crop, holticulture crops (such as vegetables, ornamental plant and fruits plant), and plantation of coffee and cacao. The agriculture activity of holticulture commodity is very important for North Sulawesi Province. The buffer area and trasition area is a centre for vegetables and fruits production.