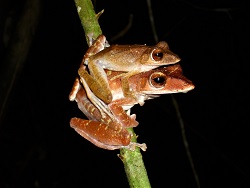 The topography of the biosphere reserve is varied. While most of the land is flat, some others are sloping (0-20%), with an altitude of 0-140 m above sea level. Its most typical topographic features are: (a) Tree-dominated wetlands, with freshwater swamp forests, seasonally flooded forests, and wooded swamps on inorganic soils; (b) Permanent freshwater lakes, such as large oxbow lakes; (c) Intertidal forested wetlands, with mangrove swamps, nipah swamps and tidal freshwater swamp forests; (d) Permanent rivers/streams/creeks; (e) Forested peat lands; (f) Peat swamp forests; (g) man-made wetland area; and (i) lowland rainforest area.

With high biodiversity, the area is a suitable habitat for various flora-fauna of Sumatra as well as rare species. There are 23 palm species (Arecaceae), 250 species of birds (22 species are migratory waders), 13 species of reptiles, 60,000 hectares of freshwater swamp and 1,500 hectares of mangrove forest recorded. A large alluvial delta in the area serves as one of the most important habitat for migratory birds, whose total number is about 0.5-1 million, in the East Asian-Australasian Flyway. Several protected species include Sumatran tiger (Panthera tigris sumatrae), Malayan tapir (Tapirus indicus), Malayan sun bear (Helarctos malayanus), saltwater crocodile (Crocodylus porosus), marble cat (Pardofelis marmorata), leaf monkey (Presbytis rubicunda). 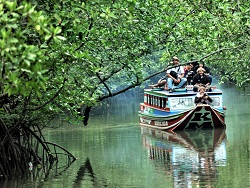 There are 2,734,987 inhabitants in the biosphere reserve. The area is home to a number of peoples, such as the Melayu (Malay) tribe, Java, Batak, Padang, Makasar and Anak Dalam tribe, as well as Chinese descendants and other immigrant communities from various islands in Indonesia. Melayu community is a local tribe, who has a specific knowledge in managing natural resources and its environment, such as about the properties and the signs of nature and knowledge of how to preserve it.

Main human activities in the area can be grouped under two main activities, which are fishing (90%) and farming (9%). Others account for only 1%. In a small scale, the wood of the mangrove vegetation is also utilized by local people for making chart and pillars of support for fishing nets. In addition, the utilization of the common palm leaves (Nypa fructican) is also very intensive.