Baishuijiang Biosphere Reserve is located in the Wenxian County of Gansu Province. One of the primary aims of this biosphere reserve is the conservation of the Giant Panda (Ailuropoda melanoleuca), and Baishuijiang is one of the regions with the highest Panda populations in China. The area is also important from a biodiversity perspective since it offers a large variance of elevations including evergreen broad-leaved forests and alpine meadows. 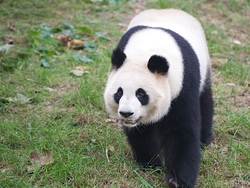 Located in the crossing area of Pale-arctic and Oriental realms, Baishuijiang Biosphere Reserve pools three major floral regions, namely China - Japan Forest Floral Region, China - Himalayan Forest Floral Region, and Qinghai-Tibet Plateau Floral Region. The main body of Baishuijiang Biosphere Reserve is suited in the eastern section of Minshan Mountain with deep-cut alpine valley. The terrain is high in northwest and low in southeast, mostly at the altitude of 1500-3100 m. It is 4072 m above the sea level at the highest peak, and 595 m at the lowest. The other part of the Biosphere is an extension of Western Qinling Mountain, moderately-cut Zhongshan mountainous area.

The forest area occupies 192194.7ha in Baishuijiang Biosphere Reserve, accounting for 85.9% of the total. The effective protection of ecosystems plays an important role in water conservation, soil and water preservation, prevention of debris flow, which guarantees ecological safety of the region. The population and quantity of giant pandas and other rare and peculiar plants and animals have been restored and increased over the last 10 years. 28 ecological monitoring sites have been established to form a more complete and relatively normative scientific research and monitoring system.

Baishuijiang Biosphere Reserve has 743 natural villages with 96,500 residents. The majority of the residents are of Han nationality, and the minorities include Tibetan and Hui people. Main economic activities held in the transition area include agricultural productions, such as tilling, reclaiming, cutting, collecting and grazing as well as some industrial activities such as mining and small hydropower, etc. In most valleys or on gentle slope of low hills, traditional agriculture under the natural economic condition is developed, and most of arable land is very steep, with average output only 300 kg or so. The mainly grazed livestock are cattle, horse and mules. The resources existing in the buffer zone are mainly used by collecting and herb-digging. For instance, bassword flower, potherb and some wild fruits like schisandra fructus and actinidia chinensis planch are collected for increasing revenue.

However, the average income keeps at a very low level in the Reserve. This gives rise to a conflict between the use of the natural resources and conservation. One of the goals within the biosphere reserve is therefore to help local communities expand the local economy, to develop eco-forestry and agro-forestry as alternative ways of subsistence, and also to develop the infrastructure in the region. Good practice for sustainable development is that, firewood consumption of the community masses has been reduced by 60% due to the improvement of cooking stove for energy efficiency and the establishment of methane-generating pits.