This biosphere reserve corresponds to the Altyn Emel state national nature park, which is one of the country’s protected areas and is very important for the conservation of the region’s biological diversity. It includes a large number of endemic plants. The site comprises deserts, riparian forests and floodplains of the Ili River, deciduous and spruce forests as well as salt marshes. The resident population of about 4,000 lives mainly from agriculture and cattle rearing as well as ecotourism and recreational tourism. 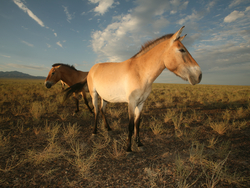 The territory of the Biosphere Reserve is located in the central part of the Ili intermountain basin. According to the natural physical-geographical zoning, the park area is a part of the Ili semidesert region of Ili-Balkhash-Alakol desert depression.

It is home to various mammal species like the muskrat, Turkmen kulan, Bukhara deer and the re-introduced Przewalski horse. The number of muskrats on the floodplain of the river or the coast and Kapchagai reservoir is low due to the sudden changes in water level. The number of kulans now has already exceeded 2692 animals. On the territory of Altyn Emel BR there is a large number of rare and endangered animals, including 2 species of fish, 2 amphibians, 1 reptile, 11 mammals and 28 birds. 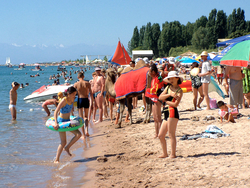 Most people make their living out of livestock breeding and some industrial production in areas like Kerbulak and Panfilov. However, this economic structure is not able to provide enough jobs for the local population.

There is a strong potential for tourism, which could generate positive economic effects, and, in fact, touristic services are dynamically developing on settlements in the Biosphere Reserve's transition zone, like guest houses, small tour companies), as well as the production of souvenirs. The infrastructure, though, is still rudimentary.