The Ak-Zhayik Biosphere Reserve is situated on the plains of the Southern part of the Caspian depression at a negative altitude on the surface of -27m. The area is one single territory, divided by the Ural River and adjacent to the coast of the Caspian Sea, the waters of which are not included in the biosphere reserve’s total area. Ak-Zhayik mainly occupies the wetlands of Ural river delta and adjacent territories along the Caspian sea coast, one of the largest bird migration routes. The route stretches from Eurasia across the Caspian and Black seas towards Eastern Africa, rendering it a concentration site for over 240 migrating bird species. The marshy depression is partitioned by a system of delta channels, with their banks overgrown by dense vegetation, and a sea depth of up to 2m. 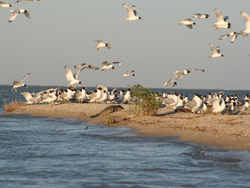 As a whole, the biosphere reserve is located in the desert zone and subzone of steppified Northern deserts, and is occupied by various aquatic and terrestrial ecosystems. Virgin steppe ecosystems, coastal ecosystems of high reed thickets, lakes' shallow waters, meadows and shrub thickets along rivers are all types of ecological features that can be found in Ak-Zhayik. This area is characterized by low plains with saline meadows, solonchaks, solonetz and spacious wetlands. The main vegetation is represented by 6 types: desert, meadow, marsh, forest, shrubs and water-submerged.

The wetlands of Ak-Zhayik Biosphere Reserve are situated on one of the largest bird migration routes, 110 of which, are water birds including 18 specially protected species. The biosphere reserve is therefore a nesting site for approximately 70 waterbirds, 8 of which are specially protected natural objects. The rare bird Pelicanus crispus can be found here with a population reaching more than 600 nesting pairs, accounting for 12% of the global population. 292 bird species in total are recorded in the Ural river delta and adjacent sea coast with a possibility of 3 million specimens during migration.

The site is the last untouched area of wild nature in the region and serves as a refuge for many species of wild fauna and flora; especially sturgeon fish, which have recently been threatened to complete extinction. There are 48 mammal species recorded in Ak-Zhayik, and aquatic parts of the site are currently the only protected territories for conservation of endemic relict species such as the Caspian Seal (Pusa caspica). In terms of flora, the area contains 229 species of higher plants, amongst which 7 species are relict (Potamogetonaceae family) and 4 species are rare and specially protected (Salicaceae family). There is also a group of medicinal plants of 10 species including ginger plant, plantain, blowball etc. 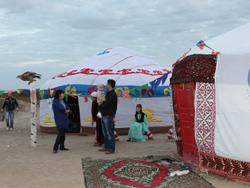 The buffer zone of the Ak-Zhayik Biosphere Reserve consists of conservational and agricultural lands, with parts of the latter used for pastures and haymaking. The transition zone is the only zone to have inhabitants with a population of over 17,000 people and a total of 490 farms.

As the Ak-Zhayik Biosphere Reserve is located in the Makhambet district and Atyrau city of Atyrau oblast, it has 11 settlements with an ethnicity composed of 98% Kazakh, and Russian, Tatar and other ethnicities making up the remaining 2%. The total population density is 23 people in 1km2 with fishing and animal stock production being the main economic activities.

These activities are mostly carried out in production cooperatives with productive landscapes ideal for cattle breeding, fishery and hunting. The private sector’s local population also benefits by breeding cattle, sheep and horses. The species group of economic importance includes the sturgeon species and large and small ordinary fish such as carp, perch or mudfish. Over 60% of fish caught in Kazakhstan is caught in fishing and marine areas adjacent to the biosphere reserve.