The Addu Attoll Biosphere reserve is located north of the Chagos Archipelago  and is the southernmost atoll of the Maldives. Consisting of about thirty small islands, the biosphere reserve is appromixately 13000 hectares. Addul Atoll is considered a city with a population of 10,000 people. The majority of this biosphere reserve is marine ecosystems with  highly diverse reef ecosystems. There are 30 islands with about 17 of them uninhabitated. Addu Atoll is divided by four channels Gan Kandu, Viligilikandu, Maakanda and Kodakanda and the island are formed by the peripheral reef. 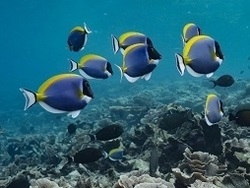 The Addul Atoll Biosphere reserve is composed of 30 islands in the southmost sector of the Maldives. Of these 30 island, 17 are uninhabited. This biosphere reserve boasts an impressive reef ecosystem with an outstanding biodiversity that includes over 1,200 fish species. Within the biosphere reserve there are a large variety of ecosystems including lagoons, reef passes, seagrass beds, sandbanks, coral islands, lush tropical vegetation, mangroves, wetlands, brackish lakes locally known as kilhis, agricultural land and residential areas. In these ecosystems are a large variety of endemic species including the Maldivian Cardinalfish, Maldivian Grubfish, Maldives Triplefin and Little Combtooth Blenny. Ecosystems found in this biosphere reserve including seagrass and mangroves function as carbon sinks and combat the effects of climate change. 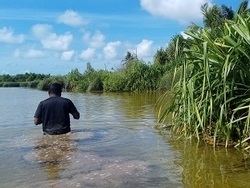 The Addul Attol Biosphere reserve boasts a population of 19,319 inhabitants. The majority of which make a living on the fisheries and tourism related to underwater sports. The beauty of this biosphere reserve attracts many visitors which thus promotes tourism in the region. The growing tourism department in this biosphere reserve is important for advancing the regions commitment to sustainable development. The Maldivian atolls are at risk by rising sea levels due to climate change as well as an increasing number of invasive alien species.