The KDN biosphere reserve is a complex of forest consists of three adjoining forests namely Kanneliya, Dediyagala and Nakiyadeniya located in the southern part of Wet Zone, Sri Lanka. Norman Myers (1990), focused world’s attention on, south - west forest in Sri Lanka as one of 18 areas of the tropical rain forests which is called  biodiversity hotspot due to its exceptional presence of species with incomparable level of endemics and rare species. 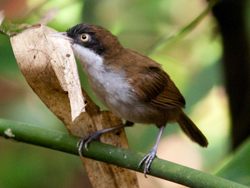 The several studies carried out in this forest complex (National Conservation Review and Biodiversity Monitoring Survey) have highlighted it’s utmost biodiversity importance. Furthermore, KDN has been demonstrated as the site that is richest in plant biodiversity in the island. Also it’s cultural, historical and socio-economical value is enormous.

The Core Zone (5894 ha) of the KDN cover whole extent of the Kanneliya consists of natural dense forests. The entire areas of Nakiyadeniya (5866 ha) and Dediyagala (13473 ha) forests too includes natural forests and cover buffer zone of the biosphere reserve.

The Transition Zone (TZ) covers variety of land uses such as tea, rubber, cinnamon and paddy cultivations and homesteads, townships and roads etc. It consists of 24 GNDs which is the smallest administrative unit in the country. The TZ resides 24,000 people who employ in various occupation categories. Some of them were considerably depended on KDN biosphere reserve for Non Timber Products (NTFP) such as fruits, medicinal plants, resins, fiber, fuel wood and bush meat. This was a major threat to the KDN BR and drastically affected in destruction of it’s habitats.