The Tlemcen Mountains Biosphere Reserve covers almost 100,000 hectares in the province of Tlemcen located in the north-west of Algeria. It has a rich biodiversity and a semi-arid climate and covers the same area as the Tlemcen National Park.

The biosphere reserve includes valuable archaeological sites, cultural landmarks and caves. It has a total population of 191,544 inhabitants who engage in agricultural activities such as livestock and grain farming, and administrative and commercial activities, as well as handicrafts. 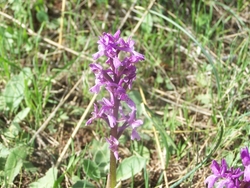 The area has a semi-arid climate, numerous cliffs and caves, and a particular karst topography. It is situated on the Lalla Setti plateau overlooking the city of Tlemcen. The biosphere reserve contains a diverse flora with over 1,130 species, 40 of which are protected. The Montpellier maple (Acer monspessulanum) is located in the Tassermramet forest; other species include the Atlas pistachio (Pistacia atlantica desf.), the Terebinth pistachio (Pistacia terebinthus), the green oak (Quercus) and the Thuya (Thuja articulate).

Examples of wildlife in the region include the common genet (Genetta genetta), the griffon vulture (Gyps fulvus) found in the mountains of Chouly, and the Eurasian bittern (Botaurus stellaris), which inhabits Oued Khemis.

The Tlemcen region is an important religious, cultural and intellectual centre. It has safeguarded traditional customs, religious holidays, and public and private ceremonies. It represents a mosaic of influences from Berber, Arab and Spanish-French history and is considered the capital of Moorish art in Algeria.

The biosphere reserve presents a rich cultural heritage with historic sites such as the Mansourah monument, Sidi Boumediene, the minaret of the mosque of Agadir and the caves of Béni Add.