This biosphere reserve is located in the south-eastern part of the Algerian Sahara close to the borders to Niger and Libya. 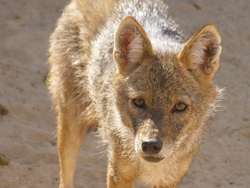 The Tassili plateau (1,500 to 1,800 meters above sealevel), forms part of the Ordovician and Devonian sandstonelayer surrounding the Precambrian crystalline massif ofthe Hoggar. The plateau is hyper-arid, but there are subaridmicroclimates suitable for the survival of relict Mediterranean fauna and flora. The most notable tree species isthe cypress 'tarout' Cupressus dupreziana, wild olive Olealaperrini and myrtle Myrtus nivellei. The site also hosts arich inventory of fauna and archaeological, historical,cultural and geologic features - the reason for its designationas national park and world heritage site. Ancient cavepaintings and rock engravings of large fauna such as hippopotamusand buffalo are of international importance. 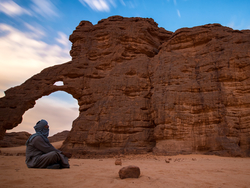 The total population of the plateau was approximately1,000 to 3,000 in 1986. The area is very sparsely inhabitedby sedentary and nomadic Tuaregs who are living fromstock rising and agriculture. Tourism has become an importantsource of income for the local population. However, litter and the destruction of archaeological artefacts pose problems to the area.