Bordering the Dead Sea at 416 meters below sea level, the Mujib Biosphere Reserve surrounds Wadi Mujib, a deep and majestic canyon that cuts through the rugged highlands and drains into the Dead Sea. It is home to a vast biodiversity that includes 300 species of plants and numerous species of resident and migratory birds.

The Royal Society for the Conservation of Nature - RSCN 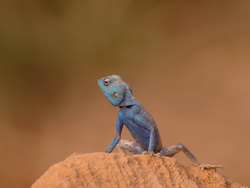 The reserve includes a system of mountains and wadis extending from the rift valley escarpment to the Dead Sea Shores. The Rift Valley escarpment drops abruptly from the edge of the gently undulating, basalt-crapped highland plateau (the rain-fed wheat fields at the heart of the ancient kingdom of Moab), with altitude and rainfall decreasing from east to west. At the higher altitude, the escarpment terran is composed of rounded, relatively ‘smooth’ spurs and promontories which descend gently westwards, and which are dissected by numerous, steep but smooth-sided valleys. At the lower altitudes, the escarpment terrain is much more broken and uneven. At all levels, there are cliffs, but these are largest and most impressive at the lowest altitudes, especially at the terminal gorge of Wadi Mujib just before it reaches the Dead Sea and the area where Wadi Hidan runs through the basalt outcrop.

The local communities of the reserve are divided into two main types as follows:

Local Communities living within the reserve: A small number of Azazmeh Bedouin live permanently in the area. They contribute to the general problem of the grazing and tree cutting. But they do not have traditional rights to the area. Total number of inhabitants who live permanently or seasonally in the transition area is around 400. The main economy for these inhabitants is livestock raising. The other communities living in the reserve and using it for grazing are the villagers who live in the surrounding villages. These villagers are living in the reserve (in the buffer zone) during winter and spring and the total number is around 300 inhabitants. These people depend mainly on grazing and farming activities for their livelihood. The last group living permanently in the core area of the reserve is the reserve rangers. These rangers are responsible for enforcing the reserve procedures systems through conducting patrol visits and monitor any environmental violation.

The reserve including all zones was established by the Prime Ministerial decree, following cabinet approval (number 4/62/13268) on the 9th of November 1985 and allocated to the RSCN for management from the Ministry of Agriculture through the Forestry Department, for the Prime minister letter in Arabic with an English translation.