The second biosphere reserve in Saudi Arabia, located in the western part of the country, is home to globally critically endangered species, including the Arabian leopard and the Arabian gazelle, as well as various endemic species of flora. About 50,000 villagers in the buffer zone and transition areas, depend heavily for their livelihood on farming and pastoral activities including the tending of camels, sheep and goats. 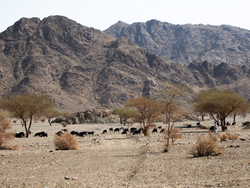 Harrat Uwayrid is an inland Biosphere Reserve and lays in the Hot Desert Biome of the Middle East and Western Asia biogeographic region, combining characteristics from both Arabian Desert and Palearctic bioregions.
In general terms the harrats harbor a vegetation with affinity to volcanic rocky slopes and some sandy areas. On Harrat Uwayrid, a number of interesting species have been found, all of them rare, including the stem-succulent Caralluma europaea, and Thymus decussatus (Sinai Thyme). A total of 19 species of mammals have been confirmed in 2019 within the reserve’s boundaries.The carnivorous comprised nine species of native carnivores, the Arabian Leopard (Globally Critically Endangered) that was considered extinct but last seen in 2018, Arabian Wolf (Canis lupus arabs) (Regionally Endemic), the Striped Hyena (Hyaena hyaena) (Regionally Vulnerable), and the Caracal (Felis caracal) (Regionally Near Threatened) being among them, Blandford’s Fox (Vulpis cana) (Regionally Vulnerable). In addition, the site is home to valuable Arabian Gazelles (Globally Vulnerable) and Nubian Ibex (Globally Vulnerable). 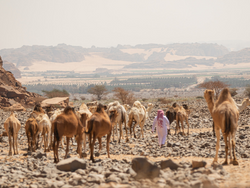 The two main human activities in the Harrat Uwayrid Biosphere Reserve are tending herds and agriculture. The first is a traditional activity for the Bedouins who represent the majority of the local community. The historical use of the Harrat Uwayrid main parts were found to be limited to herding and grazing activities. Ancient land uses were restricted to nomadic pastoral practices, limited by the shortage of groundwater and grazing lands. Bedouin communities shifted with the availability of water and grazing lands seasonally.
Moringa peregrina trees are naturally found in the area. For decades, the local community has passed down the traditional practices, from generation to another, of using tree seeds to extract oil and leaves as tea and natural remedies. The seeds also provide a means for purifying water and is a very important local source of nutrients and known as anti-oxidant.