The Djebel Bou-Hedma Biosphere Reserve and National Park is situated 85 km east of Gafsa along the southern Tunisian mountain ranges that are extensions of the Saharan Atlas. It consists of a limestone and marl mountain range with some travertine deposits and a gypsum and salt alluvium plain. 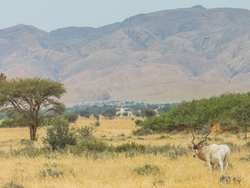 The vegetation of Bou-Hedma has the typical Mediterranean semi-arid elements of Tunisia such as plant communities of permanent and seasonal watercourses as well as steppe communities resulting from degraded juniper forests. However, it is famous for its relicts from pre-Saharan savanna (for instance Acacia raddiana forests). The fauna is characteristic of the Sahara and arid Mediterranean regions including elements which have been destroyed elsewhere in Tunisia. Endangered species comprise the addax antelope (Addax nasomaculatus), Struthio camelus australis and Gazella dama mhorr.

The area has a largely stable sedentary population with about 1,400 people (1999). The biosphere reserve faces mainly problems of desertification and excessive livestock grazing, partial land clearance and ploughing and resulting effects such as soil erosion. Research in the Bou-Hedma region is especially concerned with the restoration of the original woodland cover to combat desertification, particularly by re-afforestation of Acacia raddiana. An eco-museum has been established.