Located in the southwest of Morocco, this biosphere reserve covers a vast intramontane plain of more than 2,560,000 hectares, bordered by the High Atlas and Anti-Atlas Mountains and open to the Atlantic in the west. The area is known for its endemic species, the Argan (Argania spinose), which is not only important in terms of conservation, but also for research and socio-economic development. The Argan oil has multiple uses in cooking, medicines and cosmetics. The trees are also used as fuelwood for cooking and heating. 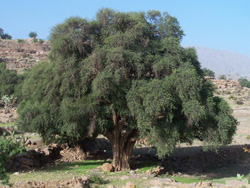 The Arganeraie (the argan tree and its ecological system) is unique in the world, as it has adapted to a particularly arid climate, creating an ecosystem for various species. The region is home to various endemic flora species, some of which are hardly found these days, like the Moroccan lotus (Lotus maroccanus) and the Selaginella balansae. On the other hand, the Biosphere Reserve features species like the lynx (Felis caracal) and the Barbary sheep (Ammotragus lervia). The latter is considered vulnerable by the IUCN’s Red List.

Lately, climate changes have translated into long periods of droughts, followed by heavy rain and floods. 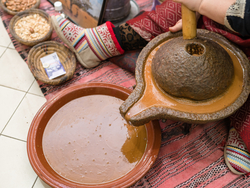 Arganeraie has a population of 3.5 million inhabitants, 60% of which live in the countryside. Most of them make a living of sheep herding and agriculture, including fruit production and the cultivation of the Argan tree and the production of its oil.

Besides, Agadir and Essaouira, which have a substantial hospitality infrastructure within the limits of the Biosphere Reserve. Along with small historical villages and ruins in the Arganeraire, they attract thousands of tourists every year.