Volcans Biosphere Reserve is located in north western of Rwanda on the border between Rwanda, DRC and Uganda, and is composed by five volcanoes including Kalisimbi, Muhabura, Bisoke, Sabyinyo and Gahinga. It has a surface area of 160km² covered by rainforest and bamboo. It is home to 30% of global population of mountain gorillas (Gorilla beringei beringei). It has 115 mammals’ species, 187 bird species, 27 reptile and amphibian species, and 33 arthropod species. It has 13 orchid species protected by CITES, and 3 endangered reptile species. It has also 245 plant species, 17 of which are threatened as per IUCN red list. 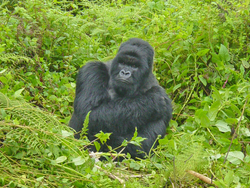 On international level, the Volcans Biosphere Reserve is part of the Albertine Rift, a very important ecological structure in the region of eastern and central Africa. It is a home to a bigger number of the fauna and flora species that are endemic to the sub region. It has the privilege of sheltering of one of the four big primate species that are found on earth, the Mountain Gorilla, an endemic and endangered sub species that lives only in two massive forests of Bwindi impenetrable National Park and the Virunga Mountains of which the core area of Volcans Biosphere Reserve is part. Mountain Gorillas attract thousands of international tourists annually, thus becoming a symbol of hope for Rwanda.

Together with its neighboring protected areas, the Biosphere Reserve forms the Virunga Mountains, a unique trans-frontier in the region, the first experiences of the regional collaboration for several areas.

On national level, it regulates climate with many other ecological services: Regional Natural forests play an important role in regulation of precipitation, as it rains three times more in virunga volcanoes than in the neighborhood. More than 300,000 persons directly depend on water supply from the forest.

During the last three decades, habitat and ecosystem structure has remained less impacted by human interventions due to the efforts by institutional management in collaboration with community conservation. For instance, the population of Gorilla beringei beringei (the most vulnerable species of this protected area) has increased in the last two decades. 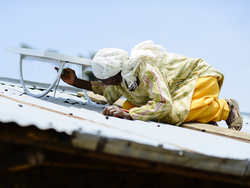 The area surrounding the Volcans Biosphere Reserve has a very good climate and a fertile soil which makes it more populated (about 570 people per km2) than the rest of Rwanda. The agriculture is the main source of livelihood for local population, as it is in Rwanda in general. Irish potatoes cultivated there are sold in many areas of Rwanda.

A 2014 project led by UNESCO and the Gorilla Organization, a local NGO, promoted the installation of solar panels in a village inside the Biosphere Reserve.