Vhembe Biosphere Reserve is located in the north-east of South Africa near the border with Botswana, Mozambique and Zimbabwe. The reserve includes the northern part of Kruger National Park, Mapungubwe National Park and World Heritage site, several Provincial Nature Reserves, two recognized centres of biodiversity and endemism (Soutpansberg and Blouberg), and the Makgabeng Plateau, which contains more than 1,000 rock art sites.

The area has a relatively large and rapidly growing human population with a high unemployment rate. This has a severe negative impact on natural resources, which are harvested in an unsustainable manner. 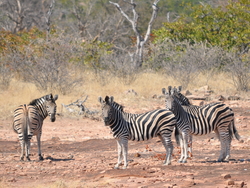 The Vhembe Biosphere Reserve includes the Mapungubwe National Park and Mapungubwe Cultural Landscape World Heritage Site, the Makgabeng Plateau with its outstanding concentration of San rock art, the Blouberg and Soutpansberg mountain ranges with their remarkable biological diversity and endemism, the semi-arid Limpopo River Valley with its unique floristic and faunal composition, and the sub-tropical northern part of the Greater Kruger National Park with its high diversity of ecosystem types and species, vast floodplains and associated unique habitats and species.

The reserve consists of three biomes, namely savannah, grassland and forest, with four bioregions home to 23 different vegetation types or biotopes. Eight of these biotopes are endemic to South Africa. The area also constitutes a bio-geographical node comprising the Kalahari and Lowveld bioregions, which are characterized by temperate and tropical climatic conditions. These zones also feature a wide range of ecologically important interactions that need to be protected to ensure conservation viability.

The area has a rich biodiversity that includes 250 species of butterfly, 44 species of amphibians, 140 species of reptiles, 542 species of birds and 152 species of mammals. These include the Maquassie Musk Shrew (Crocidura maquassiensis), the yellow golden mole (Calchochloris obturirostris), the eland (Taurotragus oryx), the Rufous Hairy bat (Myotis bocagei) and the Sykes Monkey (Cercopithecus albogularis). 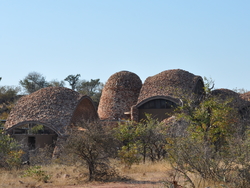 Based on statistics from South Africa’s 2001 census, the Vhembe Biosphere Reserve has a total human population of 1.36 million, 80% of which live in the Makhado (37%) and Thulamela (43%) municipal areas. The main economic activities are agriculture and tourism.

More than 100 archaeological sites have been recorded in the Limpopo River Valley including many rock art sites. The first Bantu-speaking people arrived in the area around 300 AD. They were agro-pastoralists who brought with them domestic livestock (cattle, sheep and goats) and domestic grains such as sorghum and millet. Maize was not introduced into southern Africa until the 1400s. Hunting and gathering constituted an important part of the diet of these first Bantu farmers.