Queen Elizabeth Biosphere Reserve and National Park straddle the equator in western Uganda. Covering an altitudinal range of 910 to 1,390 meters above sea level, it is composed of a wide range of ecosystems: semi-deciduous tropical high forests, undulating savanna grasslands, Acacia savanna, tundra and wetlands. The area also includes (partly salt) lakes among which are Lake George (a Ramsar site) and Lake Edward. 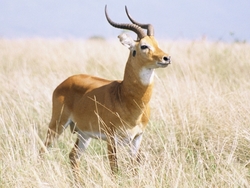 The core area of the reserve (Fig. 3) supports a wide range of Uganda’s natural habitats and landforms, including grassy plains, distinctive savanna woodlands, tropical forest, wetlands, rivers, swamps, lakes and volcanic craters. The reserve has a greater biodiversity than any other protected area in Uganda. The core area is also used as a model for conservation education, research and monitoring of biodiversity trends. The vast savannah and forest animal species and the scenic landforms attract an increasing number of tourists to the reserve. Hence, the reserve contributes to the tourism industry, which is the second Uganda’s leading income earner.

Fauna: Large herbivores species include hippopotamus, elephant, buffalo, Uganda Kob, waterbuck and Topi. Large carnivore species include lion, leopard, and spotted hyena. The reserve is also inhabited by over 600 species of birds both migrant and residents.

The following are amongst the endangered wildlife species found in the reserve: chimpanzee (Pan troglodytes), the African elephant (Loxodonta africana), leopard (Panthera pardus), and the Shoebill stork. The northern Queen Elizabeth lions (Panthera leo), although generally scheduled as Vulnerable in CITES are at a high risk of extinction due to human-lionlivestock conflicts. 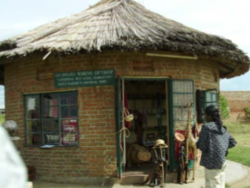 Fishing and salt extraction provide the main sources of income for the 20,000 inhabitants within the ten settlements of the biosphere reserve (1999). There is some impact on the biosphere reserve’s woodlands for example by using wood for smoking fish, cooking, lime production and handicrafts. The area surrounding the biosphere reserve has a very high population density with crop cultivation being the major economic endeavour.