The Mount Mulanje Biosphere Reserve is located in the south west of Malawi, near the border with Mozambique. Mount Mulanje is situated halfway between mountain chains and upland areas extending from the Ethiopian highlands to South Africa. It has a rich biodiversity with a high level of endemism. The Mulanje cedar (Widdringtonia whytei) found in the reserve is considered the national tree of Malawi and is highly valued for its use in silviculture and its contribution to socio-economic development. Its protection and sustainable use is of priority concern.

There are three main ethnic groups and several minorities living in the area. The main land-use activities are agriculture and pastoralism, selective logging, and extraction of medicinal plants and other non-timber forest products, as well as ecotourism. The mountain also carries an important cultural significance, as ancestral spirits are believed to reside there. These sites are now used as shrines for traditional rites. 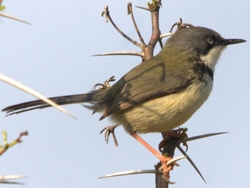 The Mount Mulanje Biosphere Reserve covers an area of mountains 26 km by 22 km formed by an impressive geophysical syenitic intrusion rising precipitously from the surrounding plains. The altitude of the reserve ranges from 600 m above sea level to the highest point of Sapitwa Peak at 3,002 m. A large section of the mountainside consists of a sheer rock face interspersed by rainforest gorge valleys to the south and east and dry brachystegia woodlands on the north and western slopes.

The Mulanje Cedar (Widdringtonia whyteii), recognized as the National Tree of Malawi, is a key species found in the mountain high cloud forests and is listed as critically endangered on the IUCN Red List. The timber is highly prized for a variety of specialist purposes; however, illegal unsustainable harvesting has led to diminishing forest cover — a matter of particular concern in small cedar clusters.

Although there are no residents within the biosphere reserve, the surrounding area is characterized by high population density with 139 village communities situated within 7 km of Mount Mulanje. These village communities consist of settlements of three tribal cultures: the Man’ganja, Yao and Lomwe. The Man’ganja immigrated into the area and the original Batwa people were assimilated into their culture. The Yao originated from northern Mozambique and moved into the area to establish trade links from the coast around the ivory and slave trades. The Lomwe were initially attracted by tea estate employment opportunities and refuge from Portuguese colonialism.

Throughout history the mountain has been an important refuge for those seeking shelter from conflict, but has never been permanently settled. The leader of the first African rebellion, John Chilembwe, sought refuge and was shot here and buried in the foothills of the mountain. The site of David Livingstone’s first Christian mission in central Africa is also located in close proximity to the mountain.