Mount Kulal's ecosystem captures moisture in the forms of mist and rain and provides important hydrological services for the entire northern Kenya. Having a volcanic origin, lava fields define the landscape in the surrounding area and the mountain's sides are steep and often slashed by deep canyons. The location of a peak as high as Mount Kulal in the middle of one of the driest regions of East Africa not only makes it unique topographically, but also contributes to the particular ecosystem services the mountain and its forest provide the region

Historically, the Biosphere Reserve was known to have been a major habitat for elephants (Loxodonta africana) and black rhinoceroses (Diceros bicornis), which were plentiful until 1976. However, these species have now been exterminated by poaching. 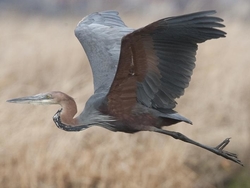 The Mount Kulal Biosphere Reserve has three main types of habitat; the mountain top habitat, the flanks, gorges and valleys and the surrounding flat lands all being niches to unique biodiversity. The most prominent components of that are the terrestrial flora and fauna and the fish of Lake Turkana. Lake Turkana to the west of Mt Kulal harbors a great variety of aquatic animals, including crocodiles, hippos, fish and birds. It is also an important water bird site. Eighty-four bird species, including 34 Palearctic migrants, have been recorded in and around the shores of Lake Turkana. Twenty-three aquatic bird species, including Goliath Heron and African Skimmer breed on the shores of the lake.

There are several other species of fauna, including many species of reptiles such as, the venomous saw scaled viper, night and puff adder, cobra and lizards. The scorpions and other invertebrate fauna are also common. Other includes the birds which are considered to be a major endowment within Mt. Kulal Biosphere Reserve attracting significant interest including the endemic Kulal White-eye Zosterops kulalensis. 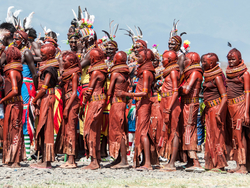 The inhabitants are mainly pastoralists of five ethnic communities all of who are culturally distinct from each other, namely the Turkana, Samburu, Rendille, Gabbra and Elmolo. These cultures have in common the fact that they are shaped by their connection to the land. For instance, the Elmolo people living in the shores of Lake Turkana are known fishermen, while the Gabbra from the northern Chalbi desert have rooted traditions with camel caring. The Samburus, on the hand, have their traditions centered on the forest, as many of their rituals are carried out around trees deemed as sacred, like the Juniperus procera, Olea Africana and Ficus.

Ecotourism is also an important activity, but is on decline due to problems with security and transport.