The Massif of Nimba is situated on the border between Guinea, Liberia and Côte d’Ivoire. 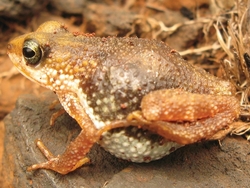 The forest of Dérécontains types of vegetation of great botanical diversity that have been relatively well preserved over a long periodof time (Von Droste et al,. 1993).

Many rare species of plants and animals, endemic or having practically disappeared from the Upper Guinea forest block because of clear cutting and hunting, are to be found in the MNBR where they have been preserved because of the rugged topography and, in some places, the lateritic soils.

The Monts Nimba chain owes its unique character to the beauty and originality of its landscapes. It is exposed to a very contrasting range of climatic influences that arise from many different factors, where the geographical location, the topography and the orientation play an important role. All these factors and many others explain the successive classification of the Nimba chain as a comprehensive Natural Reserve in 1944, a Biosphere Reserve in 1980 and a World Heritage Site in 1981 and an endangered World Heritage Site in 1992.

The biodiversity of the plains, hills and forests in the Nimba region provides the local people with food and energy, water, drugs, shelter, agricultural land, oxygen, etc. This biodiversity is considered to be a natural reservoir of resources that can encourage economic growth and ensure the welfare of the local population.

People living in the biosphere reserve mostly depend on agriculture, stock raising, hunting, gathering and fishing, as well as with the trade of crafts and mining.