The Massif du Ziama Biosphere Reserve is located at the border to Liberia in the south-east of Guinea and about 100 km from the city N’Zérékoré. 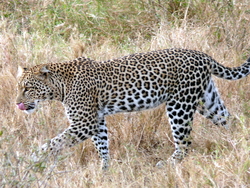 The forest is dense, evergreen or semi evergreen. There are two vegetation layers: a bottom layer at altitudes of between 950 and 1,000 m. and a mountain layer over hanging the lower layer. This layer includes: umbrophilic, mesophilic, semi-xerophile swampy, riparian and gallery forests. They include important species suchas: Niangon, lovoa, entandrophragmas, Dabema, Khaya, liroko, makoré, mamea, Bako, Popo, etc.…

According to PROGESFOR (1991-1994) Ziama includes 124 species of mammals, among them: elephants, monkeys, buffalos, dwarf hippopotamus, chimpanzees, ungulates and carnivorous animals.

Ziama forest is a refuge for several rare, vulnerable and threatened species. It is home to 22 species of mammals protected under CITES. In addition, the forest is one of the most important habitats for endemic species of the large upper Guinean forest block, between Sierra Leone, Liberia and Côte d’Ivoire.