Lubombo is the first biosphere reserve in the Kingdom of Eswatini. The country is landlocked, bounded by South Africa in the North, West and South and by Mozambique on the East. The Lubombo region is the largest of the four administrative regions of Eswatini, it represents 34.24% of the country area. The region however has the second smallest population in the country. It has a high biodiversity including a number of important populations of globally threatened species, such as the black rhinoceros (Diceros bicornis). Economic activities in the region are mainly sugar cane growing and processing, with all country´s sugar mills based in the Lowveld part of the Lubombo and this is the main contributor to the country’s GDP. 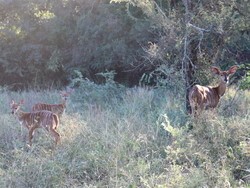 The Lubombo Biosphere Reserve covers parts of three biomes, the Lowveld Savannah, the Lubombo Plateau Forest Biomes and the Riparian zone. Although the existing protected areas are relatively well positioned to cover the variation in biodiversity, there are a number of growing threats to these reserves and the remaining natural areas within the landscapes of the country.

The Lubombo is a highly endemic zone with Lubombo Ironwoods (Androstachys jonsonii), Lubombo Cycads (Encephalartos lebomboensis), and has also recently discovered a new Barleria species (Barleria Lubombensis) confirming the need for a systematic assessment and research for the landscape. The Lubombo landscape also has  indigenous forests such as the Jilobi Forest which has high species diversity.

The ecosystem provides a habitat for a number of unique fauna some of which are endemic to a region that stretches from northern Kwa-Zulu Natal to southern Mozambique and south-eastern Zimbabwe), like the Suni (Nesotragus moschatus zuluensis) (Thomas 1898); threatened species such as the Leopard (Panthera pardus) and other near threatened wildlife and their conservation will contribute to significantly for Eswatini. 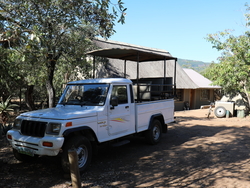 The Lubombo Biosphere Reserve can be divided into two sub-regions – the Lubombo Plateau and the Lubombo Lowveld. The Plateau is characterized by mostly communal land which has outstanding potential for ecotourism due to its unique landscape qualities, while the Lowveld is characterized by game reserves and ranches, and large sugar estates which are mostly privately owned. The lowveld area has been highly impacted through industrial scale sugar cane farming, but still contains a number of conservation areas and small remnants of riverine forest. The plateau still retains a high level of biodiversity and landscape values.

Tourism impacts in both regions at this point are extremely low. Conservation based tourism in the lowveld is practised in a manner consistent with responsible tourism in terms of environmental impacts and social impacts are generally positive as these areas contribute to local employment. No large scale tourism is envisaged in the future in these areas.