This site straddles the Tropic of Capricorn, covering some 200,000 ha along the south west coast of Madagascar, and takes its name from the town of Toliara.

This site straddles the Tropic of Capricorn, covering some 200,000 ha along the southwest coast of Madagascar, and takes its name from the town of Toliara. It contains a mix of mainland dry thorny woodlands, gallery forests, limestone caves with freshwater springs, marshlands, mangroves, sand dunes and beaches, coral reefs and marine trenches. The level of endemism is exceptionally high, with 85% for plants and over 95% for mammals (notably lemurs) and birds. Marine life is noted especially for the coelacanth, the “living fossil” fish. 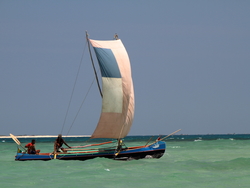 There are 17 small core areas with different regimes, including traditionally protected sacred sites and areas under the GELOSE system of protection through contracts with local communities. This is a priority area for the National Environmental Action Plan for Madagascar, which has divided the biosphere reserve into three zones to facilitate management: a northern zone with some ten villages of fishermen, small farmers and charcoal workers; a central zone which includes the town of Toliara with over 206,000 inhabitants engaged in fishing, ecotourism, trade and services; and a southern, less densely populated zone. There are numerous applied and basic research and monitoring projects, involving local, national and foreign institutions; an objective of the Biosphere Reserve is to coordinate such work in line with the integrated coastal zone management concept.