The Kruger to Canyons Biosphere Reserve is located in the north-east of South Africa. It encompasses the Kruger National Park as well as other national and provincial nature reserves such as the Blyde River Canyon Nature Reserve. Three Southern African biomes are incorporated into the biosphere reserve: grasslands, Afro-montane forests and the savannah of the lowveld. There is a high level of biodiversity, especially plant endemism on mountaintops.

There are a number of different land-use practices in the region including gold, phosphate and copper mining, the plantation of exotic species, and the extensive cultivation of subtropical fruits and vegetables. 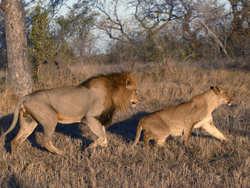 The core areas include a large portion of South Africa’s world-renowned Kruger National Park home to many iconic savanna species, including the Big 5. The Kruger to Canyon Biosphere Reserve (K2C) also forms part of the Great Limpopo Transfrontier Conservation Area (GLTFCA), a conservation area linking South Africa, Mozambique and Zimbabwe, covering approximately 3.5 million ha. It is one of the largest conservation areas in the world.

Some of the best known landmarks in the Kruger to Canyons Biosphere Region are found along the Mpumalanga Escarpment and form part of the Panorama Tourism Route — Mariepskop, the Blyde River Canyon, Bourke’s Luck Potholes the Three Rondawels, God’s Window and Graskop. This area is also considered a Strategic Water Source Area, generating a disproportionate amount of water for the lower-lying regions. Major rivers in the region include the Olifants, Blyde and Sabie Rivers.

The K2C Biosphere region extends over 2.5 million hectares and is home to a wide diversity of South African species: 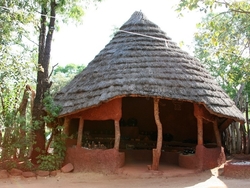 Major towns in the K2C BR include Tzaneen, Phalaborwa, Bushbuck Ridge, Hoedspruit and Graskop. There are also multiple rural villages that fall within the transition zone. The main economic activities in the region include tourism, commercial agriculture, forestry and mining. Approximately 1 547 886 permanent residents and 2 590 seasonal residents reside in the transition zone.

Tourism and hunting are major activities in the buffer zone and range from basic self-catering to luxury tourism catering for both the local and international market. Approximately 10 500 permanent residents and 2350 seasonal residents live within the buffer zone.

The most common languages are Sepedi, Tsonga, English and Afrikaans.