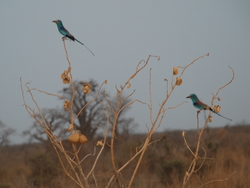 The biosphere reserve is part of the Senegal-Mauritania basin. The area has a tropical-sahelian climate in the north and a sudano-sahelian climate in the south. The average rainfall ranges from 300 mm in the north to 600 mm in the south.  The altitude rarely exceeds 50 m except at significant dune accumulations. The geological substrate consists almost entirely of sandstone and clay formations from the Continental Terminal covert by Quaternary sands that create sand dune formations of 1 to 5 m thick.

The biosphere reserve hosts relict plant and animal species of national, sub-regional and even international importance. It has a rich and diverse fauna and is home to emblematic species like the red-fronted gazelle (Gazella rufifrons), the golden jackal (Canis aureus), the spotted hyena (Crocuta crocuta), the oryx, the dorcas gazelles (Gazella dorcas neglecta) and the helmeted guinea fowl (Numida meleagris). Ferlo is currently the only refuge of the red-necked ostriches (Struthio camelus camelus) in the Sahel.

In terms of vegetation Ferlo is characterized by a great diversity of ecosystems and vegetation types which include savanna, shrub and herbaceous gallery forests along rivers, shrub-steppe, valleys, ponds and pastures. 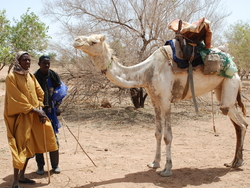 The population in the biosphere reserve is approximately 60,000 inhabitants from three ethnic groups: Fula, Wolof and Moor. The Fula are the main farmers in the area and constitute the bulk of the population. Ninty percent of the population relies on livestock, fodder resources and milk production during the winter. Subsistence agriculture is the second activity after livestock farming. Ecotourism, aquaculture or sustainable forestry will be promoted in order to diversify sources of income of the population. Ferlo also hosts several research institutions.