The fourth biosphere reserve in the west-central African country, Doumba-Rey Biosphere Reserve is best known for its bird population of over 100 identified species and exceptionally diverse flora. Located in the transition area between savannahs and forests, it plays an important role in carbon sequestration and hosts emblematic species, including elephants.

There are some 60 villages in the biosphere reserve whose inhabitants are mainly Gbaya, Mboum and Mbéré peoples who are great hunters. The area is also used by Fulani and nomadic shepherds, who make a living from pastoral activities, including sedentary and transhumant livestock breeding. In 2014, the area received more than 10,000 refugees escaping conflict. 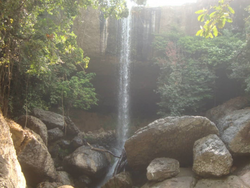 Due to its geographical location, straddling the boundaries of the North and Adamaoua regions, the Doumba-Rey Biosphere Reserve is a transitional zone with a fragile ecology that has the particularity of containing species from both forest and savannah ecosystems (forest galleries, wooded savannah, shrub savannah). It plays an important role in carbon sequestration.
A survey of the fauna revealed nearly 25 species of mammals divided into six orders, including the elephant (Loxodonta africana) and the hippopotamus (Hippopotamus amphibus), the pangolin (Smutsia gigantea), the aardvark (Orycteropus afer), the magistrate (Colobus guereza), the Buffon's cob (Kobus kob kob), the harnessed guib (Tragelaphus scriptus) and carnivores. It is an important area for bird conservation as it contains over 100 species of birds, 10 of which are protected.
Floristically, the area also abounds in exceptional diversity. The most abundant species include Anogeissus leiocarpus, Isoberlinia doka, Uapaca togoensis and Isoberlinia tomentosa. 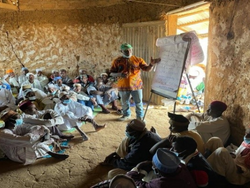 The core area of the Doumba-Rey Biosphere Reserve is crossed in its centre by the Mbéré river, which flows into the Logone, which, with the Chari, feeds Lake Chad.
The site has about 60 villages in its transition zone. The dominant indigenous peoples are the Gbaya, Mboum and Mbéré, who were once great hunters but have now become farmers. In addition, the site is intensively used by nomadic Peulh herders for pastoral activities, such as sedentary and transhumant cattle rearing.
These communities live from activities such as small-scale trade, livestock rearing, traditional fishing, subsistence farming, bee-keeping, seasonal collection of non-timber forest products and handicrafts.