The Dja Biosphere Reserve is located in the south of Cameroon and encompasses a variety of geographic and climatic zones that contribute to its high biodiversity. The area comprises mainly dense evergreen Congo rainforest and hosts a wide range of primate species. The Dja forest remains an important refuge for many plants and animal species, such as the moabi tree (Baillonella toxisperma), however increased exploitation of timber resources is exerting pressure on the biosphere reserve.

The reserve covers an area of 800,000 hectares and includes 37 villages with approximately 40,000 people (1999). The harvesting of plants for domestic or pharmaceutical use constitutes a key source of income. 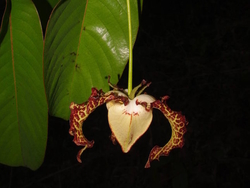 The Dja Biosphere Reserve is located between the forests of southern Nigeria and the forests of the Congo Basin, encircled by the Dja River. The area’s relief is mainly flat and consists of a succession of round-topped hills.

The biosphere reserve has a dense evergreen Congo rainforest dominated by the Sapotaceae family of flowering plants including Afrostyrax lepidophyllus, Anopyxis klaineana and Anthonotha ferruginea, as well as swamps, old secondary forest around villages and Gilbertiodendron dewevrei forest. The richness and diversity of orchids is particularly noteworthy.

The ECOFAC Programme (“Conservation et utilisation rationnelle des Ecosystèmes Forestiers d'Afrique Centrale”) of the European Union, which began in 1993, supported studies on the plant and animal biodiversity of Dja. It has established an important training centre for capacity-building purposes and supplied equipment for the UNESCO MAB Project situated in Mékas village . 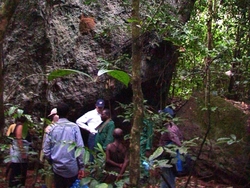 Located in the south of Cameroon, the Dja Biosphere Reserve has a population of approximately 4,000 inhabitants in the core area and 40,000 inhabitants in the surrounding areas. The main ethnic groups include the Badjoué, Boulou, Fang, Nzimé and two semi nomad groups: the Kakas and the Baka pygmies. The Baka pygmies are free to hunt within the biosphere reserve using traditional methods. Other main economic activities include agriculture, fishery, animal husbandry, hunting, mining and the harvest of plants for domestic or pharmaceutical use.

Dja represents an ideal spot for commercial hunting, supplying the capital of Cameroon with game meat. Aside from this, pressures on the biosphere reserve come from timber exploitation and a large population whose lands and traditional activities are situated within the core area.