The area is characterized by a mosaic of diverse ecosystems and physiographic environments and a range of land uses and human settlement patterns associated with the renowned Cape Winelands viticultural landscape. It includes an array of historic towns, hamlets and farmsteads, which are home to approximately 320,024 people. 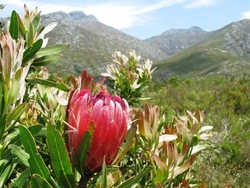 The topography of the area is characterized by a diversity of topographic features ranging from the high Cape Fold mountains and deep valleys to rolling hills and open plains. The mountain complex that forms the core of the biosphere reserve is a result of the meeting of two axes of the Cape Fold Belt Mountain Chain and provides a range of habitats and landscape features.

The area is located in the Cape Floristic Region or Cape Floral Kingdom, which is the smallest of the world’s six floral kingdoms. The Cape Floristic Region sustains 20% of the total number of plant species found on the African continent, with five endemic and two near-endemic plant families and a total of 988 plant genera containing nearly 9,000 species of vascular plants. Main vegetation types in the region include Fynbos, succulent Karoo and Renosterveld.

A high species richness of birds, mammals, frogs, reptiles and insects is found in the Fynbos biome. Bird species typical of the Cape Mountains include the hamerkop (Scopus umbretta) and the cape eagle owl (Bubo capensis). Medium-sized species occurring in the area include the leopard (Panthera pardus), the caracal (Felis caracal) and the klipspringer (Oreotragus oreotragus). Smaller animals include the baboon (Papio ursinus), the badger (Mellivora capensis) and the striped polecat (Ictonyx straitus).

South Africa has the highest tortoise diversity in the world. The Western Cape in particular is home to one of the world’s top 25 endangered turtles. The endangered geometric tortoise (Psammobates geometricus) is endemic to the renosterveld of the area.

The Cape Winelands Biosphere Reserve forms part of the Cape Floral Region, which is a UNESCO World Heritage Site. 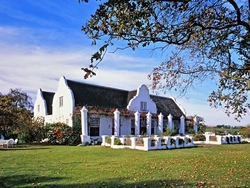 Approximately 320,024 people currently live and work in the Cape Winelands Biosphere Reserve. Main urban centres such as Stellenbosch, Franschhoek, Paarl and Wellington are home to more than 60% of the total population. The principal economic activities are agriculture, manufacturing and viticulture.

Wine-making tradition and history in the area dates back more than 350 years. The South African wine industry and its associated wine culture are primarily centred around Cape Winelands, which accounts for approximately 68% of total wine production in South Africa.

The original population of Cape Winelands consisted of people descended from San hunter-gatherers and Khoi herders. The San were the first indigenous inhabitants with the initial dispersion of humans in the area dating back about 1 million years.