The Aïr and Ténéré Biosphere Reserve is located in the Agadez region of the north of Niger and covers almost 24 million hectares. It contains the volcanic rock massif of the Aïr and the Saharan desert of Ténéré. The flora comprises about 300 higher plants, while the fauna boasts and outstanding variety of wild animals including three threatened antelope species.

The area is renowned for numerous archaeological and pre-historic sites, with rock engravings indicative of ancient human settlements. Today, Touareg nomads constitute the largest population within the reserve. 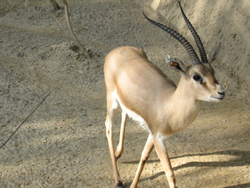 The reserve is one of the driest zones in the country and encompasses two geographic regions. Aïr is a mountainous massif consisting of crystalline and volcanic rocks and shows traces of early metalworking. Ténéré is made up of quaternary sands (fine alluviums, disc-shaped sands of aeolian origin and moving sand dunes).

The flora comprise about 300 higher plants. Several species of primates such as the olive baboon (Papio anubis), patas monkey (Erythrocebus patas), Cape Dassie (Procavia capensis) as well as carnivores (caracal, hyena) date from the humid period of the Holocene era. Other species such as the Loder’s gazelle (Gazella leptoceros), Dama gazelle (Gazella dama), white antelope (Addax nasomaculatus) and ostrich (Struthio camelus) are in a precarious situation due to low population numbers.

The Aïr and Ténéré Natural Reserve has been inscribed on UNESCO’s World Heritage List. 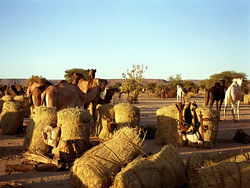 Approximately 30,000 inhabitants are live in the area of the reserve. Most belong to the Touareg tribe, although others are of Haoussa origin. The main economic activities are camel and goat raising, agriculture, small businesses and handicrafts.

In the fifteenth and sixteenth centuries the area formed part of the Songhai Empire, which at its peak was one of the largest empires in African and Islamic history. This was later superseded by the Gober kingdom of the Haoussa. Several archaeological and historical sites date back to these periods, in particular mosques. In addition, the area includes pre-historic sites, with rock engravings indicative of ancient human settlements found in the area. Unfortunately, plundering of archaeological sites by tourists and poaching are of serious concern in the biosphere reserve at present.