Abu Simbel: The campaign that revolutionized the international approach to safeguarding heritage 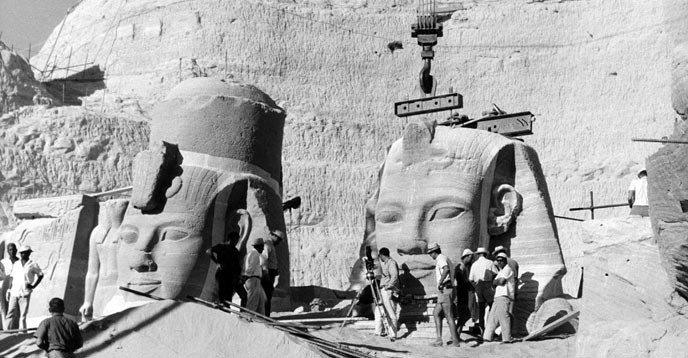 World Heritage is a simple idea, but a revolutionary one – that the world hosts cultural and natural heritage of universal value, which humanity must protect together, as its indivisible legacy.

Saving the temples of Egypt and dismantling, stone by stone, the Abu Simbel temple in the early 1960s was a first act to recognize this idea. UNESCO launched an international safeguarding campaign to save monuments in Nubia from being flooded by the waters of Lake Nasser. The construction of the Aswan High Dam in Egypt drew unprecedented international attention to the protection of cultural heritage. At that time, many people thought they had to choose between culture and development, between flourishing crops and the traces of a glorious history. UNESCO has shown that we can have both.

In 1965, the Honorable Russell E. Train co-spearheaded a drive for an international convention to protect both cultural and natural heritage, which would become the UNESCO World Heritage Convention. He understood the importance of heritage as a bulwark against extremism, as a force to strengthen what he called “a sense of kinship with one another as part of a single, global community.”

UNESCO recognizes cultural and natural sites of outstanding universal value, and protects them for the benefit of all. As the basis for dialogue and mutual understanding, safeguarding our common heritage is a shared responsibility that requires cooperation between all States Parties, along with civil society, local communities and the private sector. For instance, a project to preserve the statues on Easter Island in Chile is led by scientists from the Nicolaus Copernicus University of Toruń in Poland.

Today, the Convention has reached almost universal membership, with more than 1,000 sites inscribed. Joining all these dots paints a new map of the world, a map for peace and dialogue. “Our greatest challenge is no longer only to save temples. It is to respond to the pressures of climate change, rapid urbanization and mass tourism, economic development and natural disasters, and also, in some cases, to the lack of appropriate capacities and funding to preserve cultural heritage. We must invent and forge new alliances and funding models, new management approaches, new ways to ensure different constituencies feel responsible for the collective preservation of cultural heritage. We need to share best practices to protect monuments as well as more complex properties, such as cultural landscapes, historic cities, transboundary sites,” said UNESCO Director-General Irina Bokova for the 40th anniversary of the World Heritage Convention.

We must build on the power of such heritage as a source of identity and cohesion at a time of change. This is why UNESCO is so firmly committed to safeguarding and promoting cultural and natural heritage, in all its forms – tangible, intangible and documentary. At a time of unprecedented ‘cultural cleansing,’ cultural eradication and cultural looting, protecting heritage must be an integral part of all peacebuilding.