50 years of tsunami warning in the Pacific 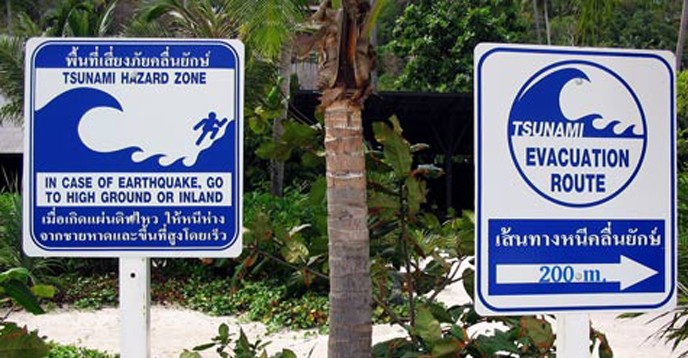 Just 50 years ago, in April 1965, the Pacific Tsunami Warning System came into being under the auspices of UNESCO’s Intergovernmental Oceanographic Commission (IOC). To mark this anniversary, and celebrate the system’s numerous accomplishments, an international symposium was held in Honolulu, Hawaii (USA) on 20 and 21 April.

7.11 pm, 22 May, 1960. An earthquake measuring 9.5 on the Richter scale – the most powerful on record – occurred south of Chile, generating a tsunami that battered the South American coastline for over 4,000 kilometres. Waves up to 25 metres high crashed onto the shores of Chile, between Concepcion and the Chiloe Islands, closest to the epicenter.

Fifteen hours later the tsunami, which by then had travelled 10,000 kilometres, struck Hawaii, then Japan and the Philippines. The final death toll was over 2000. Damages were estimated at around 24 million dollars (almost 200 million dollars at today’s values).

© ITIC - One of the early posters prepared by the International Tsunami Information Centre (ITIC).

The Pacific Tsunami Warning Centre, the system’s operational nerve centre, was also established. Based in Hawaii, it is run by the National Oceanic and Atmospheric Administration (NOAA, U.S.A) and cooperates with the North-West Pacific Tsunami Warning Centre in Japan. It evaluates threats when earthquakes occur and warns countries that lay in the path of any resulting tsunami.

Organised by NOAA, the IOC and the International Union of Geodesy and Geophysics (IUGG) the international conference in Honolulu will trace the history of this exemplary scientific programme.

Fifty years after its creation, the Intergovernmental Coordination Group counts 46 member states * and the system has evolved beyond issuing warnings to include work on loss prevention, preparing populations to respond to tsunami threats, and technology transfer.

The Pacific tsunami Warning System has direct access to more than 150 seismic stations around the world which provide information on all earthquakes of 5.5 magnitudes or more. It also receives data from tide gauges and tsunami-metres throughout the Pacific that verify whether a tsunami has been generated and estimate its size. These tsunami-metres allow for greater precision in calculating tsunami risks, and mean that warnings can be issued within five or ten minutes of an earthquake occurring.

The Pacific model has been used as a model for three other systems, launched after the deadly tsunami of December 2004, to protect most exposed regions, including the Indian Ocean, the Caribbean, the North-East Atlantic and Mediterranean.

While undeniably successful, the system still has gaps. “Going the last mile” remains a challenge, because even if the system can alert national authorities quickly, the message must then be relayed to vulnerable coastal populations that risk could be hit minutes after an earthquake happens.

Financing is also an issue. Maintaining the warning system has a cost – estimated between 50 and 80 million dollars a year. But to save lives and limit the damage wreaked by tsunamis, it’s a price that must be paid.

*Originally known as the International Coordination Group for the Tsunami Warning System in the Pacific.